Last year my friend, Drew Bridges, had to have a large oak tree removed from his front yard in the historic district of Wake Forest.  Counting the annular rings on the stump revealed that this tree predated the founding of the town.  Drew told me that he’d like to have a bowl made from this tree as his family has owned this house for nearly 40 years and his daughter grew up there.  I told him that I’d be glad to turn some bowls from this wood and we selected a piece of the trunk that was on the living half of the tree, was good and straight, and not too large in diameter about 30 feet up in the tree.  He had his tree surgeons lay out two four foot long sections close to his driveway.  It was all Drew and I could do to load the smaller of the two into my pickup: fortunately his teenage neighbor and several friends came out of their house before we tried to load the larger and we were able to enlist their help.  I brought the bolts home and split them down the middle with a sledge and wedges.  I wasn’t able to turn them right away, but a couple of months later, I roughed out 4 bowls, which I waxed and put in paper bags with the green shavings to dry for several months.

As I turned these green bowls I noticed that the wood was cutting very cleanly.  Oak is very hard, and often a hard wood, while it may be more difficult to turn, may cut more cleanly and require less sanding than a softer wood.  The appearance of the marks left by the bowl gouges reminded me of the ridges created by the fingers of potters who leave this evidence of their intimate connection to their materials in their work as a testament to the fact that they work with their hands and as a design statement – the spiraling texture adding interest to the surface of the work.  By carefully sharpening my tools and taking light finishing cuts I was able to avoid the torn end grain which often mars turned wooden pieces that are not adequately sanded.  I did not sand the last 4 bowls that I turned from Drew’s wood at all: the tool marks are evident.

After about 4 months in the bags I re-turned the first bowls to final thickness and sanded them as usual. 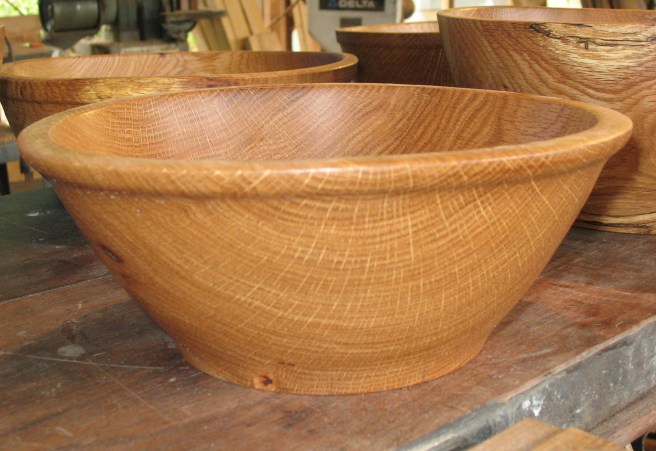 These bowls are meant to be used.  They have a food safe finish.  Oak is very tough and durable.  There is almost no sapwood included in these pieces as it had begun to spalt by the time I got to them.  I counted 90 annular rings in the heartwood alone on one of them and, as I mentioned, the part of the trunk they were turned from was a good 30 feet from the ground!